Loading
New York Times
August 20, 2021
“Is Peter Bradley Ready for Round 2 in the Limelight?”
Katya Kazakina

He rose to the top in the 1970s with a groundbreaking, racially integrated art show in Houston, then all but vanished from view. Now he’s making a comeback. 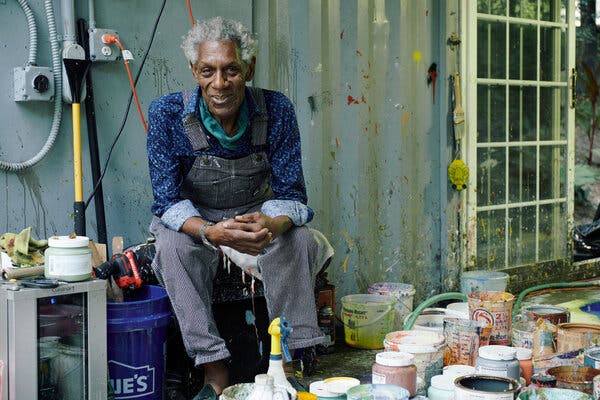 Peter Bradley at his art studio in Saugerties, N.Y. A two-venue exhibition at Karma gallery in Manhattan and Parker Gallery in Los Angeles pays tribute to “The De Luxe Show,” curated by Bradley in Houston in 1971 and one of the first racially integrated exhibitions in the United States. Credit: Douglas Segars for The New York Times

SAUGERTIES, N.Y. — The artist Peter Bradley is a month shy of 81, and his future is unfolding.

On a recent hot day, as humming birds zipped around sunflowers in his garden in upstate New York, art handlers were hauling out his paintings for three upcoming exhibitions at Karma gallery in downtown Manhattan.

The first is a tribute to the seminal exhibition Bradley curated 50 years ago, showing abstract works by 18 Black and white artists side by side in Houston. Funded by the philanthropists John and Dominique de Menil, it was one of the first racially integrated exhibitions in the country. This month, works by all the artists from the original show, including Sam Gilliam, Ed Clark, Kenneth Noland, Anthony Caro and Virginia Jaramillo, will be reunited at Karma on East Second Street and at Parker Gallery in Los Angeles.

Next up is a group show curated by the critic Hilton Als around the idea of faith, with Bradley’s new abstract paintings featured alongside works by Diane Arbus and Peter Hujar. Finally, the artist’s first solo exhibition in New York City since 1993 is set to open in October.

It’s a major comeback for Bradley, who rose to the top of the art world in the 1970s, but has all but vanished from public view in the past two decades. Karma began working with Bradley in the past year, as the reckoning over race and inequality tore through the country, following George Floyd’s murder. Karma’s reintroduction of Bradley’s abstract works comes at a time when figurative works by Black artists have surged in urgency — and demand.

“The main thing is that it happens before you drop dead,” Bradley said, sipping craft beer on a stone patio. It was 10 a.m. and he looked relaxed and chic in a Hawaiian shirt, paint-stained shorts and rain boots, his hair a nest of coarse white curls.

Bradley has always had style. As a 20-something dealer, he drove Ferraris and wore handmade suits, selling Picassos, Mirós and Calders at the Perls Galleries on Madison Avenue. He handled clients like Robert Redford and Gregory Peck. Greta Garbo and Mark Rothko stopped by to chat.

He went on to show at the prestigious André Emmerich Gallery, known for championing artists associated with Color Field painting, a postwar abstract style unrelated to race issues.

In 1971, he turned down an invitation to participate in the Whitney Museum’s survey, “Contemporary Black Artists in America” (“I didn’t want to be in the context of the artists who weren’t any good regardless of color,” he said last week). Instead, he organized a racially integrated show, which opened at the De Luxe movie theater in Houston in August of that year. In the 1980s, Bradley traveled to South Africa to set up a residency for abstract artists, began making sculpture, and went on the road with the jazz musician Art Blakey.

“The wearer of many hats (art dealer, curator, painter, sculptor, musician, teacher), Peter’s story is one worth knowing, full of great anecdotes and historical narratives that reveal a picture of the past that is otherwise still unknown to many scholars and historians,” Terence Trouillot wrote in BOMB magazine in 2017.

In person, Bradley is warm, refreshingly irreverent, unapologetic, and potty mouthed. He’s met the who’s who of the postwar avant-garde and formed his own opinions. Asked about this or that legendary artist or musician, he dispenses curt verdicts: Racist. Jerk. Drug addict. There’s no anger in his voice.

“All he wants to do is paint,” Brendan Dugan, the owner of Karma, said. “Every day is a gift, and he’s blazing ahead.”

Bradley and his wife, Debra Roskowski, live in a stone house in Saugerties, which was missing the windows, electricity and heat when they bought it in 1997. They used to cook on a double-tier stove and wash dishes with a hose outside, said Roskowski, a retired fashion designer.

There’s a massive bathtub from Bradley’s former loft on Broadway and a sink from his childhood house in Western Pennsylvania. Many valuable artworks amassed during his art dealing career have been sold to make ends meet. But he managed to hold on to a Calder lithograph personally signed to him by the artist, some tribal artifacts and elephant and giraffe skulls he brought from South Africa.

Bradley stopped wearing tailored suits after leaving Perls Galleries in 1975. “Ferrari” is now a nickname for his Hustler lawn mower. His studio occupies a shipping container parked near the house. Inside, one wall is lined with shelves of Golden acrylic paints he’s used for decades. A little oven warms up the place in the winter.

“I feel like I am composing music,” he said, seated on a Steinway stool, with Count Basie playing softly in the background. There are no paint brushes in sight. Instead, Bradley uses his hands, wooden sticks and an electric paint mixer to stir colors in plastic buckets. He then pours the concoction onto the wet surface of a canvas.

Bradley’s studio is a shipping container parked near the house. He first pours waters on canvases to help adhere the paint. A finished painting, hanging, became two works, “So What This Is It” and “Train.” Credit…Douglas Segars for The New York Times

Canvases are laid out on the floor and the grass, some sporting puddles. A few years ago, Bradley discovered that the paint adheres differently to the wet surface than to the dry one. Now he hoses the canvases before applying paint.

“In Manhattan I’d be in jail doing this,” he said. “They’d evict me immediately: water going downstairs into someone’s house.” The colors are vibrant, featuring globs of gel medium, adding depth, weight and dimension. The works look open-ended, unpredictable, like jazz.

Bradley was among a handful of Black artists, along with Gilliam, Clark and Williams, making abstract work in the late 1960s and 1970s. Now as then he vehemently opposes figuration, including “stupid figurative Black art. A bunch of slaves on boats,” he said.

“We invented abstract art, and we are still doing that kind of silly stuff.”

“Look outside. Look how abstract it is out here,” Bradley said, looking at the garden. “Before you see any plants, you see the color. What’s important is the color. Nothing else.”

The garden is a link to his childhood in Connellsville, Pa., where he had to weed his mother’s garden. Born in 1940, Bradley was adopted by Edith Ramsey Strange, a savvy and entrepreneurial woman. She bought a 27-room house, once used by the Baltimore and Ohio Railroad, and filled it with scores of foster children and visiting jazz musicians. Both were sources of revenue, Bradley said. Miles Davis, Dizzy Gillespie and other musicians boarded and performed while traveling the region.

His mother bought him an easel at a music store. (Later on, she also bought him his first luxury car, a Jaguar.)

Coming to New York City in the 1960s, he encountered racism throughout the art establishment. When he joined the conservation department at the Guggenheim, its staff had to take a vote whether he could come into the dining room for lunch. (They voted him in.) Art schools weren’t much better. The Detroit Society of Arts and Crafts was a “terrible school,” he said. “But then I went to Yale and it was just as bad. They had no respect for Black artists.”

Bradley had been commuting to New Haven two days a week while also working at Perls Galleries. He drove the Ferrari he got as a Christmas present from his girlfriend, a St. Louis heiress named Mary Frances Rand. He eventually left the Yale School of Art over a dispute with an administrator who told him he couldn’t have a fancy car on campus (though Bradley said the school made exceptions for white classmates).

Speaking with Bradley, one must accept certain narrative gaps and inconsistencies. At onetime, Bradley said that Rothko may have made the introduction to the de Menils, then the Medicis of the art world. Last week, the name of the couple’s daughter, Christophe de Menil, came up.

When the pair asked him to organize an exhibition of contemporary Black art, Bradley initially refused. Instead he suggested a show that would include strong artists of diverse racial backgrounds. He found a space at the derelict, formerly segregated De Luxe movie theater in Houston’s poor, predominantly Black Fifth Ward.

“The De Luxe show marks the very first time that good Black artists share the attention and the tribute with good white artists,” Bradley said at the time. “The Black artists look good with them simply because they are good. All the artists in the show certainly have paid their dues. Living in poverty. Wondering where the next penny will come from to buy paint, let alone food. Begging to be exhibited. Wondering whether you’ll ever be heard, be seen.”

Clement Greenberg, the influential art critic and champion of Color Field painting, came down to Houston as a guest but ended up helping with the installation of the show.

Interviewed for the catalog, Greenberg said that the event was unprecedented. “Not that art hasn’t been brought to poor neighborhoods before. But not ‘hard’ contemporary art. And with such an entire absence of condescension.” The show, he said, “sets a unique example, and one that I hope will be much imitated from now on.”

Despite this endorsement, the careers of many nonwhite artists in the show took decades to blossom. Jaramillo was 81 when she got her first museum exhibition, at the Menil Collection, last year. Clark’s career and recognition surged shortly before the artist’s death in 2019.

Bradley struggled even longer, mixing occasional teaching gigs with house painting jobs. (He helped paint a federal courthouse in Manhattan and the roses in the hallway of the Plaza Hotel, he said.)

Peter Bradley at his studio in Saugerties, N.Y.Credit…Douglas Segars for The New York Times

“Peter had success in the 1970s,” said Karma’s Dugan, “but he didn’t have the wealth and stability to keep it going.”

Bradley’s fortune began to change when he met Robert Langdon, owner of the Emerge Gallery & Art Space in Saugerties. Langdon heard about the older Black artist living and painting in town.

Last year, Karma gallery came along. “And now it’s the world,” said Langdon, who acts as a liaison between Bradley and the East Village gallery.

“It’s hard when you are not being recognized and you are down and out,” Dugan said. “Now things are exciting, things are happening. There is a dialogue and support. That’s what every artist needs.”