Loading
The Brooklyn Rail
May 6, 2020
“Louise Fishman: An Hour is a Sea”
Hearne Pardee 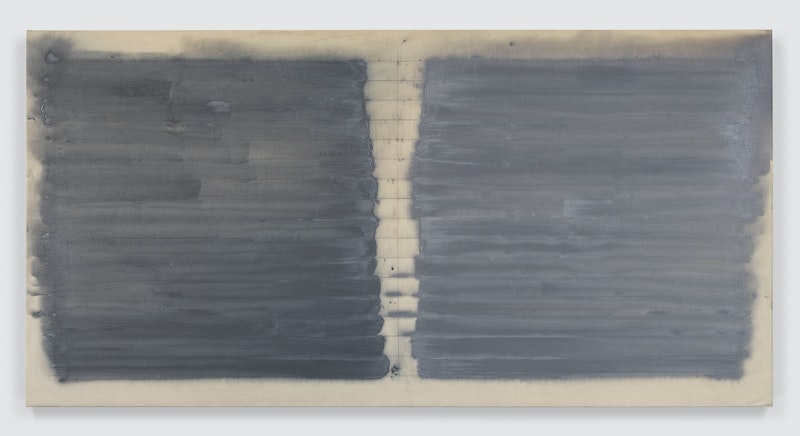 In a 2012 Rail interview, Louise Fishman spoke of the importance of her initial decisions about the size and shape of her canvases: “I go from the scale of two inches by four inches to 90 by 110.” Some of those two by four-inch canvases (along with others only two by two) no doubt appear in An Hour is a Sea, an online exhibition hosted by Vielmetter Los Angeles. Fishman spent a transformative residency in Venice, Italy in 2011 and purchased the small canvases in Europe, perhaps because they would be easy to transport. The 27 works in this show, dating from 2011 and 2014, bear images of watery vastness and flux. No less ambitious than her larger works, they display virtuosic paint handling on their limited scale. The title, borrowed from an Emily Dickinson poem, conflates time and space and links the paintings to New England, to the rougher, darker seas of Marsden Hartley and Albert Pinkham Ryder. The show expands on the interplay of time and space by including two larger works: Untitled (1971), a grid overlaid with gray washes, which anchors us in Fishman’s early explorations of Minimalism, and Jasper (2016), dedicated to a victim of AIDS, which grounds us politically by recalling a past epidemic. Always aware of the weight of history, Fishman encourages reflection on our current state of spatiotemporal flux.

Originally intended for Frieze New York, the works went online due to current events, but one can’t escape the sense that the digital format, while denying us the materiality so vital in Fishman’s work, enhances our experience in other ways, enlarging the paintings’ scope as if to compensate for their physical absence. The small paintings can be easily enlarged on a screen (the gallery points out that they are actually about the size of a cell phone), and, while they may include fewer incidents than the larger works, their effects are comparable. Seen “close up,” the enlarged weave of the canvas lends them a tactile character that hints at their actual size, as do the grains of sand glued to some surfaces. By bringing the textured grid of their material supports into such close focus, digitization places us in intimate contact, albeit virtually, with Fishman’s materials themselves.

Deep blues, grays, and greens predominate, sometimes mixed into swirls of white impasto. On the quantum scale of the small works, paint is as tactile as it is visual. Trained in calligraphy, Fishman is sensitive to the pressure of her tools and the amount of paint applied, especially along the edges of the stretchers, which it sometimes overflows. Some works are painted on boards with a faux weave, which offers more resistance. Thinly brushed areas bring out the weave of the canvas, evoking tides washing over a beach and slowly soaking in. Elsewhere, roughly scumbled pigments suggest weathered metal. Fishman’s darker washes could be mud, set in contrast to jewel-like grains of sand and warm, white impastos, applied in sculptural waves like cake frosting. Untitled (2014), #FIS150—the works are identified by inventory numbers—moves from left to right in layers, from thin white gesso into progressively denser washes of green, culminating in a rose-like efflorescence of white impasto puddled in green drips. The interplay of rough and smooth surfaces recall Adrian Stokes’s celebration of water and polished marble in Stones of Rimini (1934); the terms he coined for carved reliefs—“stone blossom,” “incrustation,” or “sea-crusted effect”— could equally apply to paintings like the tiny Untitled.

The inclusion of Untitled (1971)—whose washes also evoke the sea—broadens the context for Fishman’s abstraction, which is usually identified as Abstract Expressionist. Its paired fields of matte gray, one darker than the other, are loosely stitched together by an exposed grid. The poured paint resembles the Xerox toner sometimes used by Jack Whitten, whose rasterized “slabs” resemble Fishman’s textured grounds. Elsewhere, colored stains suggest color-field painting, to which they lend a harsher materiality. Jasper relates more in palette and facture to the small paintings but feels larger, even in the digital context. More about open space, its broken grid of sooty black verticals slashed by thinly scumbled greens and whites, Jasper bathes the rhetoric of Kline and de Kooning in cool luminosity, balancing violence with stillness.

The acute intimacy of the small paintings establishes an ironic distance from Abstract Expressionist heroics. Digitization focuses our gaze on their exposed ground and subjects Fishman’s methods to visual deconstruction. It is as though the viewer can revisit the self-scrutiny involved in her transition from stained grid paintings, like the 1971 Untitled, into gestural works that “came out of my own experience.” She harkens back to Cézanne and Soutine. Here, while the online format amplifies their context, it ultimately leaves out the works’ mute, material presence, so reliant on touch—an absence that adds poignancy to today’s enforced remoteness.