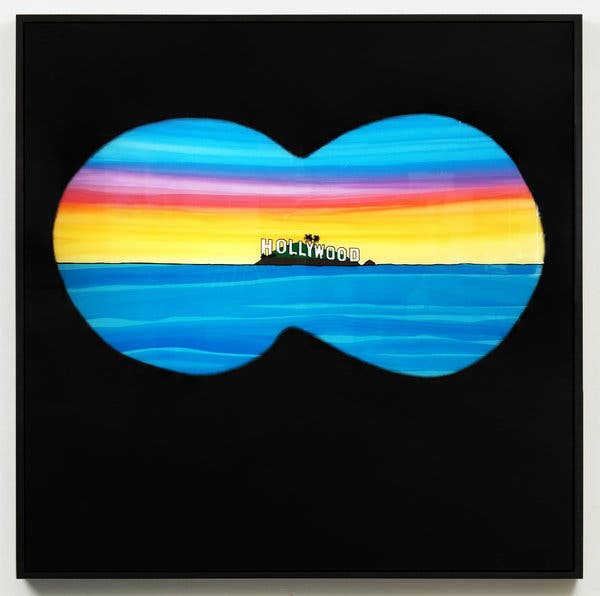 “Untitled, 2019” by Alex Da Corte is being shown by the Karma gallery of New York, which is taking part for the first time. (Alex Da Corte/Karma, New York)

There is nothing quite like the buzz of a big, glamorous international art fair.

For larger, more well-established galleries with big-name artists on their rosters, there is a nonchalant air to their booths — they know the drill. But for galleries that are showing for the first time, it can be a nerve-racking experience that can feel like an enormous gamble in terms of expense, but also a huge opportunity in exposure.

“A gallery’s position is often measured by the level of fair that it is present at,” Orsolya Hegedus, the director of Budapest’s Acb Gallery, wrote in an email, “and the axiom ‘context is everything’ is peculiarly true for the art world.” The gallery will be showing for the first time at Art Basel Miami Beach.

There are a number of galleries, including High Art in Paris; Revolver Galeria in Lima, Peru; Société in Berlin and Hunt Kastner in Prague, that have “graduated” this year to the main Galleries sector of the art fair, while New York’s Karma, a fairly new gallery, will be participating for the first time, going straight into the main section.

Others, like Galeria Agustina Ferreyra in Mexico City, will participate for the first time in the Miami Beach show in Positions, while six galleries new to Art Basel Miami Beach, including 10 Chancery Lane Gallery from Hong Kong and Paris’s Galerie Mitterrand (as well as Acb Gallery), will be in the Survey section, which is focused on works created before 2000.

“The gallery is growing up and at some point you question yourself, ‘Should I go in the main section? Should I not?’” said Philippe Joppin, one of the three founders of High Art. “We had the feeling it was the right time for us.”

According to Artsy Marketplace’s vice president, Dustyn Kim, last year there were over 80,000 attendees at Art Basel Miami Beach, including more than 200 leading international museums, cultural institutions and art patrons.

“Galleries can gain access to a suite of collectors and art world insiders at the kind of level and scale that they cannot elsewhere,” she said, “so it really gives these galleries unrivaled access to the top end of the market that can be important in terms of the next stage of developing their artists’ careers.”

While it may be the right time for a newer or smaller gallery to try to get into the bigger fairs like FIAC, Frieze and Art Basel, the costs can be almost prohibitive. Kacha Kastner, the co- founder of Hunt Kastner, said that considering flights, hotels, the shipping of art plus paying for and installing the booth, the cost can run upward of 60,000 euros (roughly $66,500).

“Galleries like us from emerging markets where the art market is still not well established, these fairs are sort of problematic because stands are so expensive,” she said. “Our artists do not command prices that can really make it financially viable for us to just go there every year, and it is really kind of a risk for us.”

For Marta Kolakowska, the founder of Warsaw’s Leto Gallery who took two of her Polish artists to Frieze New York in 2012, that wager did not pay off and she now focuses on niche or smaller fairs like the Material Art Fair in Mexico City in February.

“Frieze was an adventure and we had a lot of expectation,” she said, adding that even smaller fairs can cost a gallery between €8,000 and €16,000. “It was fantastic to be in this crowd of huge galleries and big names, but in the end we spent a fortune to do this and there were not many results for us.”

That is something that some premier fairs are trying to remedy in order to continue drawing smaller and younger galleries. Art Basel in June this year introduced a sliding scale pricing model that they have also adopted for Art Basel Miami Beach.

Unlike previous fairs, at which all galleries in the main sector paid the same square-meter price, now the square-meter price changes with the size of the booth. Also, contemporary galleries that are showing for the first time in the main sector of the fair are receiving a 20 percent discount this year, and if they go a second time they receive a 10 percent discount.

“That was recognition of the fact that the transition from being in one of the project-specific sectors to the main sector was very difficult often for galleries, and even if you are going into a relatively small booth in the fair you are suddenly paying 10,000, 15,000 or 20,000 more for your booth then you had previously,” said Marc Spiegler, the global director of Art Basel. “So we said, ‘Let’s give people a couple of years to find their footing and find out how to do the sort of booth we would hope for and make the finances add up.’”

Brendan Dugan, founder of Karma, said “smaller and mid-tier galleries are at a disadvantage” but added that in the end it is, after all, a commercial endeavor.

“Sales are obviously important because it is quite expensive to do fairs, but that moment to connect with people, talk about the artists and the programs, for me that is an important part of doing fairs,” he said. “Obviously Basel is the highest level of that, so you are getting dialogue with the people that you want.”

While that dialogue may not turn into sales, attending can prove to be a good long-term investment for galleries. Ms. Kastner said that though they did not get great sales during FIAC in October, once they were back in Prague they sold works from their inventory from the artists they showed in Paris to people they had met at the fair.

“So that is a direct result,” she said. “I do think without a doubt when we go to bigger fairs, even if we do not sell what we showed over the year or the two years, we will sell work either to people who saw us or met us or heard of us because we were there.”

Bigger fairs can also serve as a professional acknowledgment of how a gallery has established itself on the global art scene.

She serves on the selection committee for Art Basel Hong Kong’s Discoveries and Insights sectors, and will be showing in the Nova section at Art Basel Miami Beach.

“Even collectors get excited like, ‘Wow, you have been accepted into Basel.’ Everyone understands how meticulous that system is so it does feel like a huge deal.”